Looking for a quick “pick-me-up” without having to chug an energy drink or down a few supplements? Neurogum could be exactly what you’re looking for.

While it seems too simple to work—caffeine, l-theanine, and b-vitamins packed into a piece of gum—it’s actually quite innovative and useful. In my review, I found it to be a really great alternative to my daily 3 cups of coffee and it even improved one really important aspect of my life (keep reading to find out what).

Neurogum came to life in October of 2015 by founders, Kent Yoshimura and Ryan Chen.

Kent has a background in Cognitive Neuroscience, art, and film. Ryan has a background in Chemistry and Management Economics. As friends and business partners, they wanted to solve the age-old problem of giving people a quick-fix for energy and motivation during the day. While many other businesses were creating either supplements in pill/capsule form or energy drinks, Kent and Ryan decided to try something unique (and a little risky).

They spent a year working with chemists, brain surgeons, and athletes to develop the first iteration of Neurogum. While most nootropics are packed to the brim with ingredients, Neurogum isn’t and that’s for a reason. Narrowing it down to caffeine, l-theanine, and b-vitamins, they found the perfect combination of ingredients that gave results without the negative side-effects.

After raising over $20,000 during a round of crowdfunding on Indiegogo, they had secured the funds and the positive public backing needed to create and ship Neurogum.

Years later, Neurogum still has a strong user-base. From entrepreneurs and athletes to regular 9-to-5 office workers, people from all backgrounds are giving it a thumbs up. 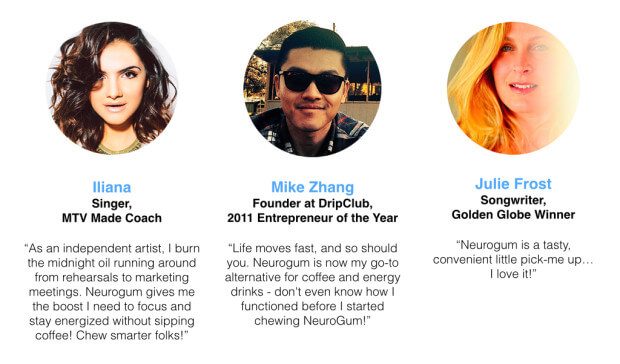 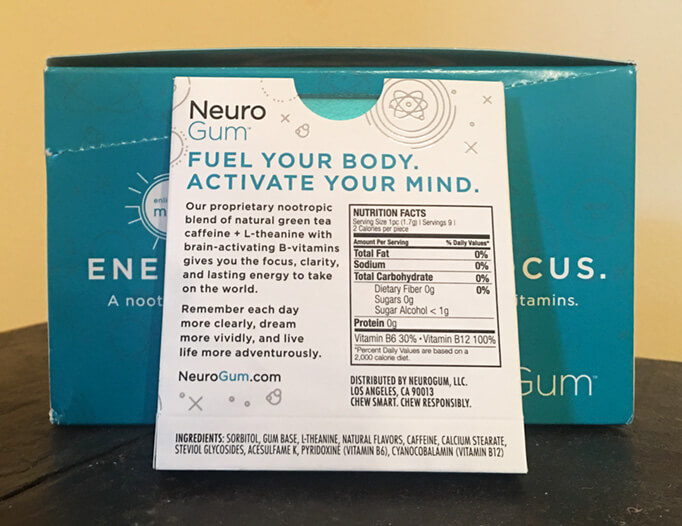 While Neurogum doesn’t pack as many ingredients as some of the other nootropics out there (I’m looking at you, Qualia) it does have the right ones to help optimize the brain for focus and sustained energy without crashing. Below is an in-depth look at each ingredient, along with links to studies that back-up its effectiveness…

Why Caffeine and L-Theanine Might Be The Best Brain Booster 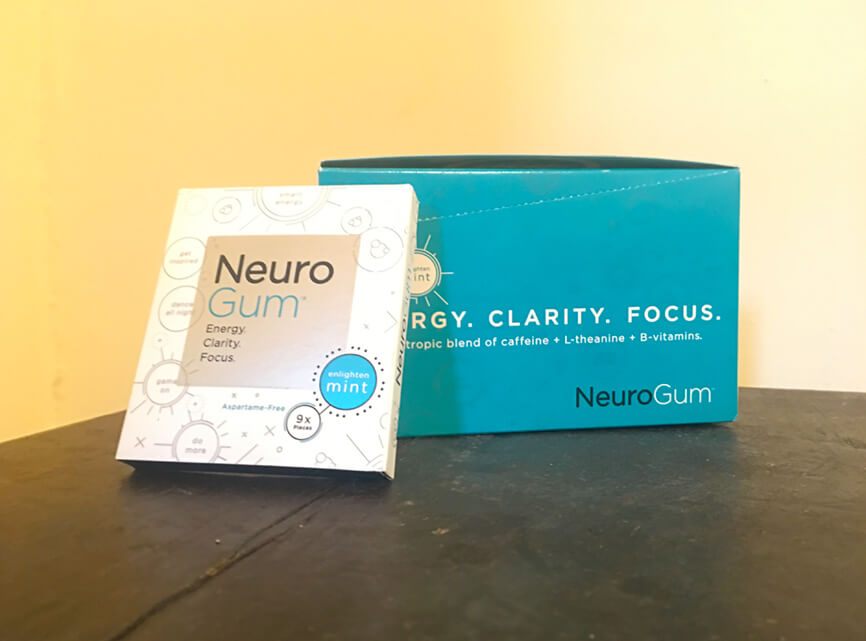 People new to the world of nootropics are usually turned off by the vast amount of supplements that are out there. Not only that, but people almost always have their own opinions on what works best and why.

I know when I first started to get interested in nootropics, I could barely keep up with all the different “stacks” available. It was overwhelming and one of the reasons why I started this site. I wanted to review all of the major nootropics out there to give people a regular guys view of what the nootropic does and find out which are the best.

The first nootropic stack I ever stumbled upon was caffeine and l-theanine (2 of the 3 main ingredients in Neurogum). It was simple and gave me the mental boost I was looking for. Of course, I’ve experimented with a ton of other nootropics since then but I almost always go back to caffeine and l-theanine on a regular basis (usually in the form of green tea).

It’s not only my personal opinion that caffeine and l-theanine work for giving its users better cognitive performance, research backs me up. A study in 2008 looked at the effects of 50mg caffeine, with and without 100mg l-theanine on healthy volunteers. The results were not surprising:

Beyond my own personal opinion and the scientific research, one of the biggest nootropic forums on the web (/r/nootropics) recommends caffeine and l-theanine on their FAQ page.

Already being a big fan of caffeine and l-theanine, I was really excited to give Neurogum a try… 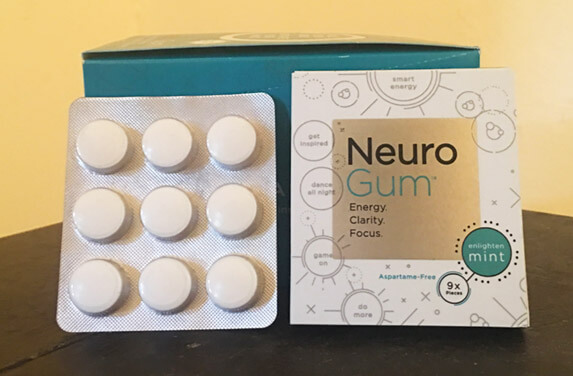 To properly test the effects of Neurogum in my regular life, I spent seven days using it. I am an avid coffee drinker but to make sure that I didn’t interfere with the results of my review by having too much caffeine (mixing coffee with Neurogum) I decided to sustain from any food or drink that had caffeine in it.

The first day I tried Neurogum was a Saturday. I had been up late the night before celebrating a friends birthday so I woke up a bit groggy. Even though I didn’t feel like it, I knew I had to get some work done. After a small breakfast of 2 scrambled eggs and a vegetable/fruit juice, I popped Neurogum in my mouth and started chewing.

Let me start by saying, this gum does not taste like Juicy Fruit or any other gum that is packed with sugar. If you’re familiar with how caffeine tastes in supplement form, it has that same slight bitterness. I’m not saying it tastes bad though, the mint and sweeteners definitely give it some nice flavor. To be honest, I like that it doesn’t taste “great”. If it did, I might be tempted to have more than a few pieces throughout the day, which could lead to a lot of caffeine coursing through my veins.

About 10 minutes after my initial chew, the minty flavor started to die down a bit and the nootropic cocktail of caffeine, l-theanine, and b vitamins started to kick in. It felt similar to drinking green tea. I was out of my initial morning “brain fog” and off to work at a relatively nice pace.

I wouldn’t say that I necessarily got more done while chewing Neurogum but it definitely gave me a mental boost. I wasn’t drilled into my work like I would be on Lumonol or Optimind but that isn’t a bad thing. Since it was the weekend, I wanted to be free to bounce around from project to project, grab lunch with friends, and enjoy myself.

Around day four of using Neurogum I discovered one of its biggest benefits—it’s a great pre-workout supplement. In the early years of working out I had been taking normal pre-workout supplements that were loaded with nasty ingredients and fillers. I’d drink a cup, head off to the gym, and hope that it wouldn’t make me feel nauseous or jittery from all the caffeine. As I grew up, I slowly started to wean myself off of pre-workout supplements but my workouts definitely suffered because of it. I just wasn’t able to push myself as hard.

When I popped in a piece of Neurogum and headed to the gym for the first time, I didn’t think much until I started to warm up. I felt the nootropics kicking in and noticed my energy levels pick up. It was about mid-workout when I really started to notice how my mood changed. It must have been the release of the dopamine, serotonin, and adrenaline from the workout and Neurogum combining. The extra energy that Neurogum gave me helped push me through a serious workout that day. It was probably one of the best gym sessions I’ve had in a year. What’s more is that chewing the gum actually helped me focus on my breathing as I was lifting weights.

Note: I don’t recommend chewing gum and working out or running. It’s a very big choking hazard. If you choose to use Neurogum as a pre-workout like I did, try it before hitting the weights or doing anything strenuous. Maybe start chewing on your car ride or walk to the gym and spit it out before starting your lift.

On my last day of using Neurogum (day seven) I was only up to using two pieces per day. I’d start chewing one after breakfast and one mid-day. Whereas I usually drink around three cups of coffee per day (300mg of caffeine) I was only taking in 80mg of caffeine using Neurogum. This made me think that Neurogum would be a great way for someone to wean themselves off of a caffeine addiction, kind of like Nicotine gum for smokers. Instead of going cold turkey, which can lead to some negative side-effects like brutal headaches, Neurogum could be used and slowly decreased over time. It definitely helped me kick my caffeine addition. By the end of the review period, I wasn’t craving coffee or tea as I normally do.

Neurogum is a really interesting nootropic. For those that are new to the world of nootropics, I would say that Neurogum is a great way to get started. It’s much more “user friendly” than downing a bunch of supplements and the main two ingredients are almost the same as what’s in green tea (caffeine and l-theanine).

While I didn’t experience incredible focus, motivation, or productivity while using it, there was definitely an uptick in my energy levels, mood, and ability to get things done. The best part was I didn’t experience any weird or negative side effects—no crashing, no jitters, and no nauseousness.

Overall, I give Neurogum a big thumbs up and recommend it to people new to nootropics or those who want to try something simple and easy to use.

Neurogum Rating
4.5
Mood
5
Energy
3.5
Focus
3.5
Memory
3.5
Verbal Intelligence
Overall Rating 4 / 5
DISCLAIMER: We are not doctors. The opinions on this website are not to be taken as medical advice. None of these opinions have been reviewed by the FDA. Consult your doctor before taking any supplements. We receive free products to review and participate in affiliate programs, where we are compensated for items purchased through links from our site (at no cost to the buyer). See our disclosure page for our list of comped products and affiliate programs. BrainWiz.org is a participant in the Amazon Services LLC Associates Program, an affiliate advertising program designed to provide a means for sites to earn advertising fees by advertising and linking to amazon.com. 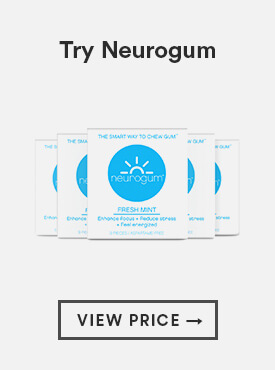