Today we are going to be reviewing one of the Internet’s most talked-about nootropic formulas: OptiMind. A couple of things drew us to this supplement. First, mainstream media outlets including Vice and Elite Daily positively reviewed this product before its rebranding from Alleradd to OptiMind, and we were curious to see whether the hype was real. Secondly, the supplement’s formula has a lot in common with one of our favorite supplements, Lumonol, making it worth a try in our book.

Our testers tried out the sample packs of of OptiMind to see if the claims of it being a “surprisingly powerful and beautifully balanced” supplement were true.

Read on to find out what our testers thought of it… For elevated mental performance, start with 1-2 capsules in the morning. Increase the dosage as needed. Depending on your body type and tolerance, you may increase this to a single serving of 2-4 capsules, but do not exceed 8 capsules per 24-hour period.

As with any new supplement, I am naturally skeptical of initial claims. That is no different when it came to OptiMind. However, after my experience of using it for a full week, I was pleasantly surprised.

The first morning I woke up feeling groggy, with a slight case of “brain fog”. This is because I had a hard time falling asleep the night before. Nevertheless, I got out of bed and made breakfast. During breakfast I read over the OptiMind ingredients and suggested use. Everything seemed pretty standard — Bacopa Monnieri, L-Taurine, Phosphatidylserine, GABA, L-Tyrosine, Alpha Lipoic Acid, Caffeine, Vitamin D, Vitamin B12, Calcium, Magnesium, Vinpocetine, Huperzine A, and Sulbutiamine. I noticed that it contains some of my favorite nootropic ingredients, one of which being Bacopa Monnieri.

I decided to skip my daily morning coffee since OptiMind already has caffeine in it. This is because I didn’t want to double down on my caffeine intake early in the morning and crash by the afternoon. I also didn’t want the caffeine to interfere with the results of the review. So I downed a full dosage with a glass of water and got to work.

After the first 20-minutes, I started to notice a slight increase in energy levels, much like I do when I have a cup of coffee. A little later my focus really started to pick up. My initial experience felt a bit like drinking an energy drink except without feeling jittery or anxious at all and with a ton more focus. I think the reason behind this energy/focus combo comes down to the mixture of caffeine and l-taurine (both of which make up a lot of energy drinks on the market).

As the day went on I realized that I wasn’t as distracted. This meant I could get more done without having to take breaks. In a way, it felt like I could reclaim a few hours of my day — a huge plus!

As the day transitioned into night, I slightly expected a mild crash from the caffeine. However, there was none. This could be because I don’t crash unless I have massive amounts of caffeine or because of the makeup of OptiMind. Regardless, it’s another big plus.

The week that I took OptiMind went very well. The noticeable effects were an increase in energy mixed with higher levels of focus and concentration. This, of course, led to higher levels of productivity too.

By the end of the week, I noticed my to do list was much lighter than it normally was. This was due to the fact that I could get more done during the day than I normally could. As a business owner and as someone who likes to be as efficient with their time as possible, I really liked this aspect of taking OptiMind.

Surprisingly, by the seventh day, I had not built up a tolerance. I usually see a waning effect in the benefits when taking a nootropic by the seventh day. This is because my body tends to get used to the dosage and need more to feel the same effects as a result. I’m sure there would come a time that I would need to cycle off OptiMind but I didn’t need to while reviewing it.

Overall, I was very happy with how OptiMind performed. They kept it simple when it comes to nootropic ingredients and created a supplement that does what it says it will — increase focus and energy.

After reviewing OptiMind I decided to keep some capsules at my desk because I like to use them when I’m on a deadline and really need to focus. They have been lifesavers especially when pulling “all nighters” because of the increase in energy that they give.

“I started out with 2 capsules in the morning with breakfast, and I felt a pretty clear wave of energy and focus. This lasted well into the afternoon… I upped the dosage to 3 capsules to see how that felt.”

“I took the full four-capsule dose as a pre-workout. I felt energized and ready for the workout…”

“I tried out OptiMind with my usual cup of coffee in the morning, starting with 2 capsules on the first day, and then 3 capsules on the second day. I had a quite a ‘wired’ morning after 3 capsules. I felt clear-headed and was able to concentrate on the task at hand… I tried it again with no coffee the next morning, and I felt productive.”

OptiMind’s formula consists of a number of popular nootropic ingredients paired with energy boosters like caffeine and B vitamins. Our testers experienced a mental and physical boost, but the fact that the amount of caffeine per serving is not listed had some of our testers feeling like Goldilocks: It took awhile to find the right dosage for them.

OptiMind’s manufacturer has some mainstream traction, and their formula is a bit different than others we’ve encountered (for example, it doesn’t contain a direct form of choline, but it does have ingredients involved in choline production). But we weren’t over-the-moon impressed.

Always remember to consult a trusted medical professional before taking any supplement. We are not doctors and our opinions are not intended to diagnose, treat, cure, or prevent any disease.

Optimind Review
4.8 / 5 Score
View Price
Pros
Simple to use.
Increases energy and focus levels.
Able to feel effects without even taking full dose.
Cons
Try not to combine with coffee/tea as it could lead to a crash.
Summary
Optimind is a great starter nootropic. We had a lot of success using it, even at half the dose. The added caffeine means that you have to be careful if you already drink a lot of coffee/tea during the day (could cause a crash).
Focus
Energy
Memory
Beginner Friendly
DISCLAIMER: We are not doctors. The opinions on this website are not to be taken as medical advice. None of these opinions have been reviewed by the FDA. Consult your doctor before taking any supplements. We receive free products to review and participate in affiliate programs, where we are compensated for items purchased through links from our site (at no cost to the buyer). See our disclosure page for our list of comped products and affiliate programs. BrainWiz.org is a participant in the Amazon Services LLC Associates Program, an affiliate advertising program designed to provide a means for sites to earn advertising fees by advertising and linking to amazon.com. 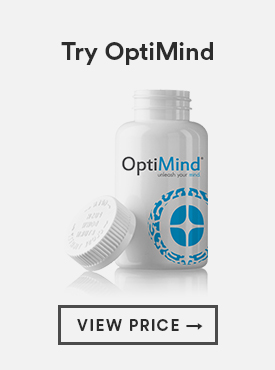