If scientists could measure the data-storing capacity of the human brain in familiar units, the estimate lands around 2.5 million gigabytes. By comparison, the largest computer hard drive currently in existence only holds 10,000 gigabytes.

The human brain holds great potential for memory and recall, but few of us use it to its full potential.

We live in a fast-paced world where nearly everything is immediately available at our fingertips — information, entertainment, and more. Perhaps because of this, we have developed a habit of rapidly switching focus. The average human has an attention span of around 8 seconds. Yes, you read that correctly. Our attention span is around the same as a goldfish.

So, how do you tap into your brain’s true potential and harness all of that brain power to maximize your memory and focus? Many have looked to the world of nootropics to do so and no nootropic is as popular as Onnit’s Alpha Brain supplement.

Alpha Brain is a nootropic made with earth grown nutrients and other powerful ingredients to boost your memory, focus, and processing speed. It is completely free from stimulants (such as caffeine) and works by directly stimulating your neurotransmitters — essentially kicking your brain into high gear so you can achieve its full potential.

Here is a list of the ingredients you can find in Onnit’s Alpha Brain nootropic:

Though many supplement manufacturers make lofty promises with their supplements, Onnit’s Alpha Brain nootropic is clinically demonstrated to provide the advertised benefits.

Now, let’s take a closer look at the 12 key ingredients in the Alpha Brain supplement as well as some of the scientific research that supports these benefits.

Alpha Brain is designed to be taken once a day, preferably with a light meal, to maximize the benefits. In addition to several individual ingredients, this supplement also contains three proprietary blends – Onnit Flow Blend, Onnit Focus Blend, and Onnit Fuel Blend. Keep reading to learn more about these blends as well as the individual ingredients they contain.

Also known as pyridoxine, vitamin B6 is a water-soluble vitamin and coenzyme that plays a role in supporting cognitive development and the biosynthesis of neurotransmitters. Vitamin B6 is an incredibly versatile nutrient, and the human body cannot synthesize it on its own, so it must come from food and/or supplements.

In terms of its cognitive benefits, vitamin B6 has been shown to improve mood regulation, primarily due to its role in creating mood-boosting neurotransmitters like dopamine, serotonin, and gamma-aminobutyric acid (GABA). This vitamin also helps decrease the damage caused by cellular toxicity which may help slow the progression of memory loss and cognitive decline, particularly related to Alzheimer’s.

An amino acid compound, l-tyrosine plays a role in the synthesis of catecholamine neurotransmitters like epinephrine and dopamine which are involved in memory, mood, and mental processing. By supporting neurotransmitter synthesis, l-tyrosine may slow or reverse the effects of cognitive stress.

The inclusion of l-tyrosine in Onnit’s Alpha Brain supplement is for the purpose of boosting attention and focus. This amino acid has been shown to promote working memory and to improve cognitive performance. Most notably, it provides these benefits in high-pressure thinking situations and in periods of fatigue, high stress, and sleep deprivation.

This is an amino acid that has been shown to increase alpha brainwave activity which plays a role in boosting memory and information processing. L-theanine also helps settle excitable neurotransmitters like serotonin, dopamine, and GABA to improve focus. This supplement has been shown to provide benefits for learning, creative problem solving and studying – any task that requires calm attention and focus. It may also reduce the stimulant effects of caffeine. In terms of its long-term effects, l-theanine protects neurons from oxidative damage, helping maintain healthy cognitive function during aging.

Oat straw is a type of grass that grows at the top of the oat plant (Avena sativa) before the oat grains form into a head. This plant has been a source of food for at least 3,000 years, but its cognitive benefits were only discovered within the last century. Oat straw exhibits antioxidant and anti-inflammatory properties and offers a wide range of benefits for mental health and cognitive function.

What makes oat straw extract unique is the fact that its nootropic benefits are almost immediate. This extract has been shown to produce an increase in brainwave activity, to regulate dopamine levels in the brain, and to improve attention. It also increases alertness and decreases inflammation in the brain.

This is a type of phospholipid (fat) that occurs naturally in every cell in the human body but is most highly concentrated in the brain. This supplement has been shown to enhance brain health and function by boosting memory, relieving cognitive stress, and slowing or reversing the effects of cognitive decline.

Though phosphatidylserine is produced naturally, the body requires high levels and, while it is found in most foods, it is only in very low levels. Supplemental phosphatidylserine can improve memory and learning, improve attention, and support the synthesis and action of major neurotransmitters like dopamine, serotonin, norepinephrine, and acetylcholine. It also plays a key role in producing energy and supporting nerve cell function.

Native to the Amazon rainforest, cat’s claw has a long history of use in traditional medicine. This ingredient offers powerful antioxidant and immune-boosting properties, which help to fight infection and relieve symptoms of arthritis.

Also called Uncaria tomentosa, cat’s claw is a tropical vine that grows up to 98 feet tall and is covered in hooked thorns that resemble a cat’s claw. The bark and root of the plant have long been used in traditional medicine, but modern research has resulted in the development of a unique method of extracting the active ingredients to create AC-11 the Rainforest Super Herb.

This proprietary blend contains three active ingredients: l-alpha glycerylphosphorylcholine, bacopa extract, and Huperzia serrata extract. These ingredients work together to improve executive function, or the ability to focus on a goal and to execute tasks as quickly as possible. These benefits are measured by improvements in peak alpha brain wave patterns. Onnit’s Alpha Brain supplement contains a combined 240mg of these ingredients.

This is a compound made up of glycerophosphate and choline that increases acetylcholine production in and improves delivery of choline to the brain. Acetylcholine is a neurotransmitter that supports learning and memory while choline improves memory and focus. The primary benefit of l-alpha glycerylphosphorylcholine is to support other nootropic ingredients and to boost the production and function of neurotransmitters in the brain.

This herbal extract has a long history of use in traditional Ayurvedic medicine, known for its antioxidant and adaptogenic properties. Bacopa extract has been shown to improve memory and longevity while reducing stress, mood disorders, and chronic pain.

In one study, Bacopa monniera extract was shown to guard against the effects of both acute and chronic stress. It has also been shown to enhance the activity of neurotransmitters like acetylcholine and serotonin to provide mood-regulating benefits. Other studies have shown the benefits of Bacopa extract for improving memory and higher cognitive processes.

Commonly known as northern firmoss, Huperzia serrata is a plant extract and a natural acetylcholinesterase inhibitor. Acetylcholinesterase (AchE) is responsible for the breakdown of the neurotransmitter acetylcholine which plays a role in learning, memory, and attention. By inhibiting AchE activity, Huperzia serrata helps prevent cognitive decline and memory impairment. This herbal extract also supports mitochondrial energy production and boosts the activity of brain antioxidants to prevent free-radical damage in the brain cells.

This proprietary blend contains three active ingredients: l-leucine, vinpocetine, and pterostilbene. These three ingredients work together to boost ATP production in the brain, maximizing the production and use of energy in the brain to fuel peak performance and optimize memory and focus. Onnit’s Alpha Brain supplement contains a combined 65mg of these ingredients.

An amino acid used for muscle and energy synthesis, l-leucine cannot be produced by the body and must be taken in food or supplement form. This amino acid increases energy production as well as cell longevity. L-leucine has been shown to significantly improve physical endurance and performance while also speeding muscle recovery and preventing muscle loss.

A synthetic compound derived from vincamine, vinpocetine boosts blood flow to the brain for improved cognitive performance – it also offers thermogenic benefits, burning fat and enhancing exercise performance. One study showed that the benefits of vinpocetine for enhancing cognitive function are similar to those of caffeine and other nootropics, but a 2014 study showed progressive improvements in cognitive performance among participants over a 12-week study period.

A naturally derived polyphenol antioxidant, pterostilbene is similar to resveratrol in terms of its brain-boosting benefits, but it offers 80% bioavailability compared to resveratrol’s 20%. Pterostilbene has been shown to increase neuroplasticity in the brain to improve learning and memory while also providing neuroprotectant benefits due to its antioxidant and anti-inflammatory properties.

How These Ingredients Work In Unison

Now that you know a little more about the benefits of the 12 ingredients included in the Alpha Brain supplement, you may be wondering how they work together.

Onnit has conducted numerous clinical trials of their own to verify the efficacy of their supplements. In one randomized, double-blind, placebo-controlled study, Alpha Brain was found to produce significant improvement in verbal memory, logical memory, and executive functioning compared to placebo. These results were duplicated in a second study in which participants taking Alpha Brain experienced a 12% greater improvement in verbal recall and 21% faster completion time in executive function assessments compared to the placebo group.

Not only does Onnit perform their own clinical research, but the data is subjected to a rigorous peer-review process to verify its accuracy. 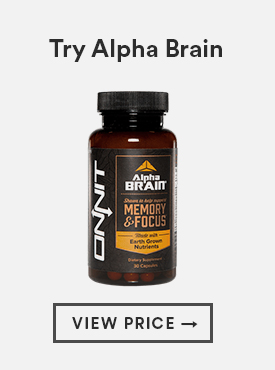