Onnit’s Alpha BRAIN has become one of the world’s most popular, and among the world’s most famous, nootropic stacks. Its fans include celebrities, professional athletes, professional gamers, and “bodyhacking” enthusiasts around the globe. In our review of the original formulation in capsule form, Alpha Brain scored extremely well and was effective for our testers.

Now, Onnit is taking their popular, “all-natural” formula in a new direction with a powdered version than can be quickly dissolved in water for a nootropic drink. The company claims this speeds absorption of their key ingredients. Read on to see what we thought of Alpha Brain Instant’s effectiveness, flavor, and overall usefulness in our Alpha BRAIN Instant review. Suggested Use: Adults, as a dietary supplement, take one packet mixed with 8 ounces of cold water, preferably with a light meal. Do not take more than one packet in any 24-hour period.

“I didn’t notice too much of a difference between Alpha BRAIN and Alpha BRAIN Instant, I felt the same effects from both for similar durations. This surprised me a little, because their formulations are in slightly different amounts. I did like that it was drinkable; sometimes I skimp on drinking water in the morning, when you tend to be dehydrated, and this prompted me to start taking in more liquids than I normally do. That may be a slight benefit, but it’s probably enough to get me taking Alpha BRAIN Instant more regularly than regular Alpha BRAIN. (Note Alpha BRAIN is already the nootropic stack I take most often.)”

“I thought this stuff was pretty tasty, though I’ve got a sweet tooth, I don’t think they’re flavors everyone will love. I also thought it did act slightly quicker than standard Alpha BRAIN. I don’t get very much energy from Alpha BRAIN, though it does keep me even throughout the day, and I tend to experience lucid dreams occasionally while on it.”

“I really like Alpha BRAIN in its classic form, though I noticed a slight drop off in effectiveness after two weeks, while others tend to feel the effects increase over time. After our review of Alpha BRAIN Instant, I think it is a good idea, but the flavor is just too stevia-sweet for me, a lot like their Matcha Chai, which is pretty good otherwise. If they made it less sweet, it’d be delicious. I’ll stick to nootropics in capsule form for now.”

“I prefer taking Alpha BRAIN in the morning with coffee or some form of caffeine. If you’re someone who wakes up thirsty and dehydrated, this could be a good option, as it prompts you to drink something before chugging coffee (which can be a diuretic). And it really does feel like Alpha BRAIN, maybe a tad quicker onset (but I didn’t experience any crash or dulling of effects as the day wore on). I’ll add it into my rotation, it’s something I enjoyed sipping on the way to work from a water bottle.” Natural Spice or Natural Peach: Which Flavor Is Better?

Our testers overwhelmingly preferred the Natural Peach flavor of Alpha BRAIN Instant, as the Natural Spice flavor was almost too sweet. As one tester put it, Natural Spice was “halfway to a spiced cider, and you can tell it’s only halfway.” Natural Peach tended to have a slightly fruity, more refreshing flavor with less of an aftertaste.

Alpha Brain Instant proved very similar in effect to its capsule predecessor. Any difference in absorption speed wasn’t noticed very acutely by our testers, but the effects were at least as pronounced and long-lasting as standard Alpha BRAIN.

While some of our testers thought the taste bordered on overly sweet, they generally appreciated the option of having the stack in drinkable form. This encouraged them to consume more liquid and hydrate more rapidly in the morning; in some studies, morning dehydration has been linked with reduced performance on cognitive tests.

If morning hydration is a challenge for you, or if you don’t like swallowing pills, Alpha BRAIN Instant could be an effective nootropic stack that’s at least as good as Onnit’s original formulation. 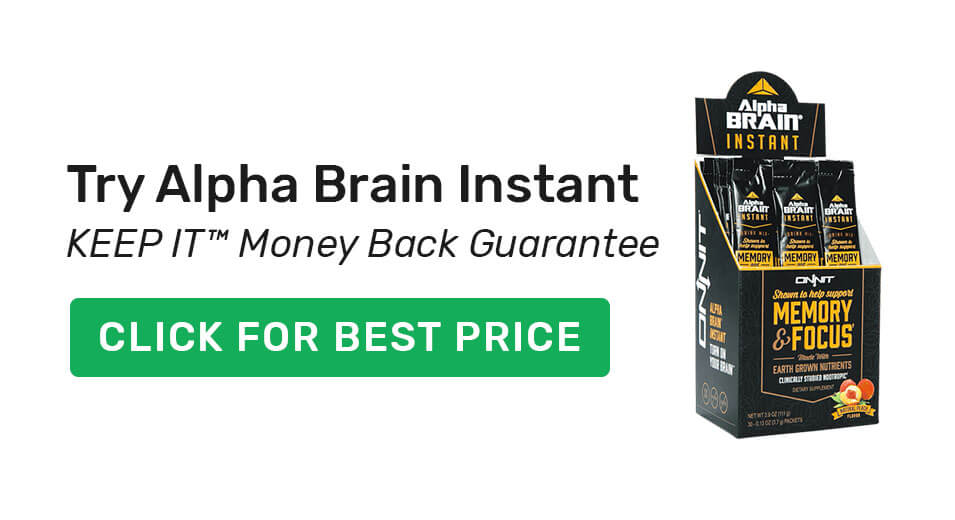