Avanse Nutraceuticals created a simple, three-ingredient nootropic designed to both boost the effects of their flagship product, Lumonol. Lumonol Nova can also be used on its own for what the company advertises as clean energy and stress protection. Lumonol Nova’s formula is nearly identical to a product we’ve recently reviewed, Smart Caffeine, with the noted addition of one ingredient: N-Acetyl L-Tyrosine (NALT). Read on to see how this straightforward booster does on its own AND when paired with Lumonol.

Click here for the best price on Lumonol Nova. “I’m usually hesitant about caffeine, but after my positive experience with Smart Caffeine, I decided to give Lumonol Nova a try. The energy was very smooth, with no jitteriness or anxiety. I may not like coffee, but supplements like this have become a great energy option for me.”

“I’ve been doing the 90-day Lumonol protocol (with a few breaks to test other supps) so I was really excited to add the Nova to the mix. I’m not sure whether it was a combination of the cumulative effects of the Noopept in regular Lumonol, and the Lumonol Nova, but I felt extra alert and felt like my brain was quicker at accessing information than ever before. I really enjoyed this combination. I worked up to 2 capsules of Lumonol Nova with 2 capsules of Lumonol.”

“I really enjoyed the calm energy this gave me. I started out with one capsule with my morning coffee, and another in the afternoon, and there was no edginess. I’m not a fan of the artificial blue and red coloring in it, and I try to stay away from artificial food coloring as a general rule. I know this product would be just as effective without it, and hope that Avanse considers revising its formula in the future. ”

“This was a great option both pre-workout, and in the afternoon instead of a cup of coffee. I took 2 capsules in the morning, and had an incredible workout. I was able to still feel that smooth energy into the early afternoon, when I took one additional capsule. There was no real crash, and I felt pretty composed despite having a high-stress day.”

Lumonol Nova
3.9 / 5 Score
AvailableBuy Now
Pros
Cons
Summary
Lumonol Nova is a straightforward formulation based around the caffeine + l-theanine pairing, with the addition of N-Acetyl L-Tyrosine. We almost wish it was JUST a caffeine + l-theanine supplement, as the addition of tyrosine adds another stimulatory element that may be less optimal for beginners.
Focus
Energy
Memory
Beginner Friendly

Lumonol Nova (see current price) is a solid option for those seeking a calm and clean energy, unlike that of a cup of coffee. All of our testers felt focused and energized, and the energy just mellowed out, rather than producing a crash. It tested similar to Smart Caffeine, and our testers were split as to which they preferred. For beginners in the world of nootropics, a simple two-ingredient stack like Smart Caffeine is usually a great starting point.

Those who paired it with Lumonol felt that the effects of both supplements were heightened and complemented by each other. This may not be the best supplement for those not willing to give up their cup of coffee, but it is a convenient energy and mood booster. 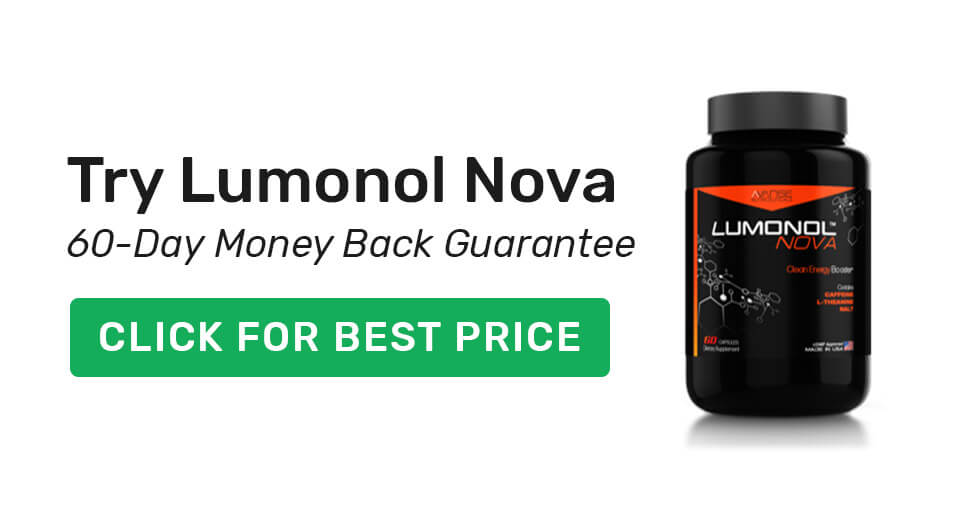